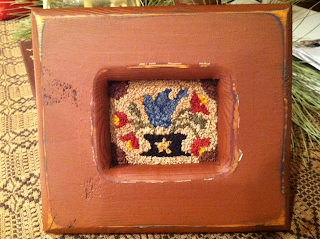 So this is my attempt at a "fake" punch needle. Its all french knots.... I have seen the most beautiful punch needles in frames for around 80 to 100$... but I didnt want to pay that much for one... nor invest in all the supplies to make one..so I just did what I knew! :) So a thousand french knots later and a "made up" pattern and make over thrift store frame... and wa- lah! ( Im thinking the bird needs a "eye" however now that I look at it) This was a fun little craft to do while watching TV with hubby... I just feel like TV is such a waste of time so I have to multi task :) 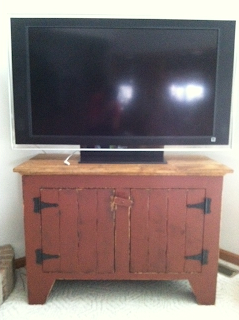 SPEAKING of TV.... this is our new TV stand/ cabinet! My dad made it for me and I LOVE IT. I just had to give it a good beating (which I really had a hard time doing bc he did such a NICE job on it!) but I really wanted an "old" look to it. Painted in black, then barn red, then stained and sanded to look distressed! IF you could have ONLY seen what a jungle of cords and mess our TV area was BEFORE... it was awful! This is just so nice and organized now. Isaiah is a bit disappointed bc this was his hideout until I put the shelves back in :) 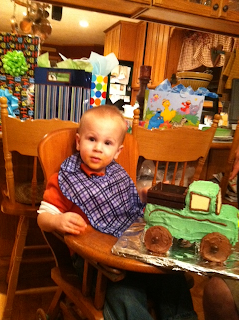 Here's the Isaiah man! He turns 2 this Feburary 8th... but all the grandparents were up staying with us... so we had a "fake" birthday party ahead of time. 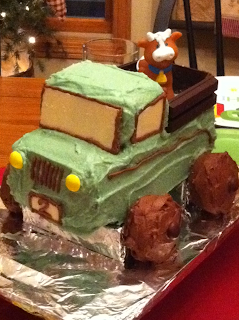 Here is the 3D truck cake I made him...I have never done this before!!! It was kinda tricky... but I was thrilled when Isaiah looked at it and said "vroom vroom, beep beep".... so it MUST have somewhat LOOKED like a truck !!! :) He liked it so much that he freaked out when we tried to cut it! He did lick at some wheels though :) (yeah... we ate it after he went to bed ) 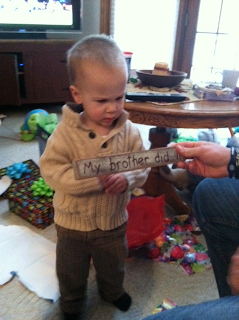 A cute little sign his "Ba ba" made him... Mom's favorite gift for him ! ha! Amongst the basketball hoop, books, poddy seat, mini bike, cars, and on and on....what a spoiled boy! 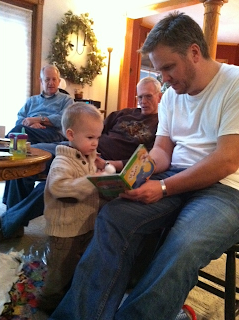 Look at all these handsome men! Gpa's and Daddy here. 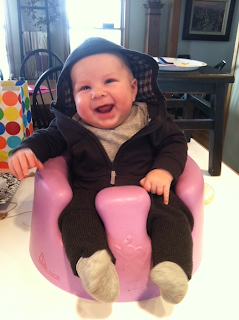 Oh Micah... you made this post as well. 2 1/2 months now and a BIG BOY!! wearing 6 month old clothes and almost a bit too chunky for the bumbo that we dusted off from storage this week :) He gives us all kinds of smiles and blows us bubbles now. Still a bit cranky/ colicky in the evening ... but getting better. We are still considering keeping him ;)
Until next time!, Elisha
Posted by Elisha at 9:32 PM 3 comments:

So... once again the hearts come out for Valentines day! I have a Christmas tree up with some fabric hearts with frayed edges... but my son keeps "collecting them" in a pile rather than keeping them on the tree! :) These are a couple ones I picked up at the thrift stores and have re- done over a bit. 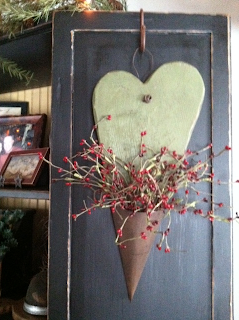 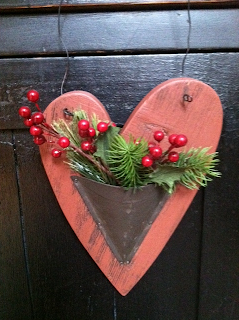 This one I painted barn red and thought how cute would some sweet annie and some stained cheesecloth wrap be with it? But being that I dont HAVE any of those things... this will do :) 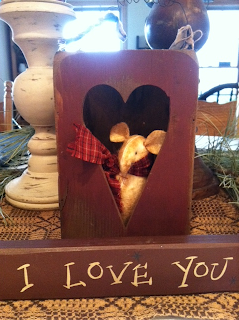 Heres another find from a garage sale... was gonna use it to make a wood piece... but for now will use for Vday... and Isaiah just LOVES the little mice around the house peeking out... so its fun for him I guess :) Like I say.... I really stay away from the hearts... but for 50 cents here and there... its kinda fun for Valentines.
Posted by Elisha at 9:00 PM 1 comment:

My husband and I

Elisha
Since I got married in April 2009, I have been adjusting to country life and being a stay at home wife and Momma. Previously I worked FT as a RN, now very part time I have much more time to do the things I love! I love old stuff... primitives & antiques & thrift shopping and can't wait to get some projects done between raising precious babies and being a helpmate to my husband.

Add Snippets to your site